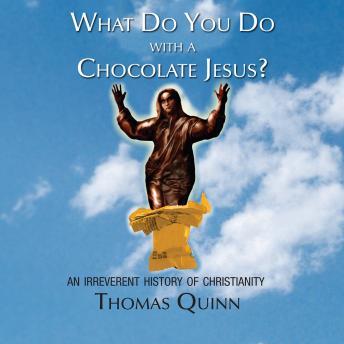 What Do You Do with a Chocolate Jesus?: An Irreverent History of Christianity

Download or Stream instantly more than 55,000 audiobooks.
Listen to "What Do You Do with a Chocolate Jesus?: An Irreverent History of Christianity" on your iOS and Android device.

"What Do You Do with a Chocolate Jesus?" is the funny and skeptical, yet genuine, exploration of the Christian history they don't teach in Sunday school. It finds humor, irony, and occasional insight amid the inconsistencies, absurdities, hypocrisies, and flat out weirdness that too often passes for eternal truth. Like a history of religion as done by The Daily Show, it humorously explores the facts, the history, and the big ideas in an engaging and entertaining story. Pitting actual Scripture against pious propaganda, Thomas Quinn treks through chapter and verse of the New Testament, explores the sordid saga of medieval beliefs (including End-of-the-World panics and fights about what kind of stuff Jesus was made of), and reveals some of the shocking attitudes of America's founders toward religion. It isn't always pretty, but it's usually good for a laugh. If war is too important to leave to the generals, religion is too important to leave to the preachers. Skeptics need evangelists, too.

Thomas Quinn is a writer for print and television, as well as a documentary producer and director. He received an M.F.A. in writing from The American Film Institute, worked as a story analyst for Universal, DreamWorks, and HBO, and was an entertainment reporter for a weekly Los Angeles magazine. Quinn has traveled the world producing for the Discovery Channel, the History Channel, National Geographic, Science, BBC, and others. His programs investigate strange cultures, bizarre beliefs, and deconstruct everything from famous urban legends to supernatural events to conspiracy theories. He also presents humorous lectures on these same subjects. In 2005, Quinn received two Emmy Award nominations as a writer and producer for the History Channel documentary, Beyond the Da Vinci Code. Originally from New Jersey, he now lives in Los Angeles.