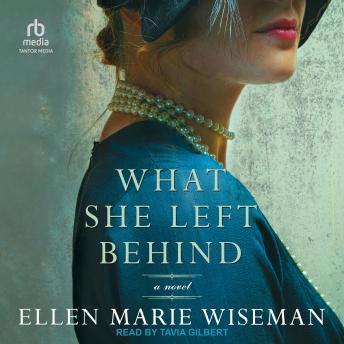 What She Left Behind

Download or Stream instantly more than 55,000 audiobooks.
Listen to "What She Left Behind" on your iOS and Android device.

Ten years ago, Izzy Stone's mother fatally shot her father while he slept. Devastated by her mother's apparent insanity, Izzy, now seventeen, refuses to visit her in prison. But her new foster parents, employees at the local museum, have enlisted Izzy's help in cataloguing items at a long-shuttered state asylum. There, amid piles of abandoned belongings, Izzy discovers a stack of unopened letters, a decades-old journal, and a window into her own past.
Clara Cartwright, eighteen years old in 1929, is caught between her overbearing parents and her love for an Italian immigrant. Furious when she rejects an arranged marriage, Clara's father sends her to a genteel home for nervous invalids. But when his fortune is lost in the stock market crash, he can no longer afford her care-and Clara is committed to the public asylum. Even as Izzy deals with the challenges of yet another new beginning, Clara's story keeps drawing her into the past. If Clara was never really mentally ill, could something else explain her own mother's violent act? Piecing together Clara's fate compels Izzy to re-examine her own choices-with shocking and unexpected results.