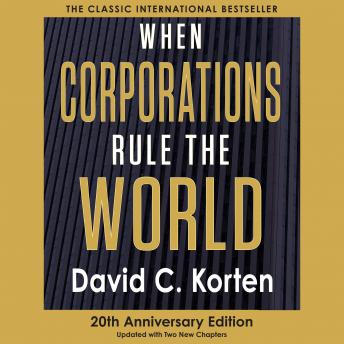 When Corporations Rule the World

Download or Stream instantly more than 55,000 audiobooks.
Listen to "When Corporations Rule the World" on your iOS and Android device.

Our Choice: Democracy or Corporate Rule

A handful of corporations and financial institutions command an ever-greater concentration of economic and political power in an assault against markets, democracy, and life. It's a “suicide economy,” says David Korten, that destroys the very foundations of its own existence.

The bestselling 1995 edition of When Corporations Rule the World helped launch a global resistance against corporate domination. In this twentieth-anniversary edition, Korten shares insights from his personal experience as a participant in the growing movement for a New Economy. A new introduction documents the further concentration of wealth and corporate power since 1995 and explores why our institutions resolutely resist even modest reform. A new conclusion chapter outlines high-leverage opportunities for breakthrough change.