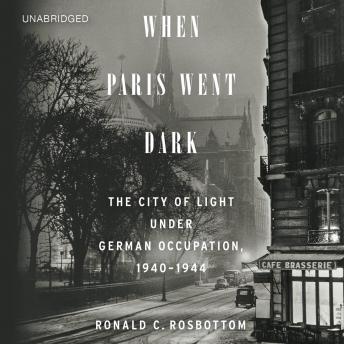 When Paris Went Dark: The City of Light Under German Occupation, 1940-1944

Download or Stream instantly more than 55,000 audiobooks.
Listen to "When Paris Went Dark: The City of Light Under German Occupation, 1940-1944" on your iOS and Android device.

The spellbinding and revealing chronicle of Nazi-occupied Paris.

On June 14, 1940, German tanks entered a silent and nearly deserted Paris. Eight days later, France accepted a humiliating defeat and foreign occupation. Subsequently, an eerie sense of normalcy settled over the City of Light. Many Parisians keenly adapted themselves to the situation-even allied themselves with their Nazi overlords.

When Paris Went Dark evokes with stunning precision the detail of daily life in a city under occupation, and the brave people who fought against the darkness. Relying on a range of resources -- memoirs, diaries, letters, archives, interviews, personal histories, flyers and posters, fiction, photographs, film and historical studies -- Rosbottom has forged a groundbreaking book that will forever influence how we understand those dark years in the City of Light.