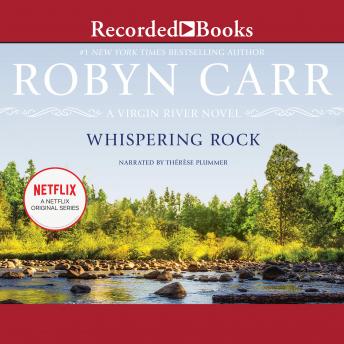 Download or Stream instantly more than 55,000 audiobooks.
Listen to "Whispering Rock" on your iOS and Android device.

A RITA Award winner, New York Times bestselling author Robyn Carr has garnered critical acclaim for her wildly popular series set in the close-knit mountain community of Virgin River, California. In this third entry, an injured hero must convince a traumatized survivor to transcend her fears and embrace life anew. Amidst the shadows of majestic redwoods, wounded LAPD Sergeant Mike Valenzuela finds the help and healing he needs. As he recovers, Mike observes firsthand the transforming power good wives have on Marine Corps buddies Jack and Preacher. And he longs for the kind of marital bliss they enjoy. He even thinks he may have found the right lady-Jack's sister, Brie Sheridan. But when Brie is brutally attacked, Mike struggles to inspire the woman he cherishes to trust and love again. Seasoned with laughter and tears, Whispering Rock-magnificently narrated by Thérèse Plummer-is a compelling tale of love taking flight despite wrenching adversity