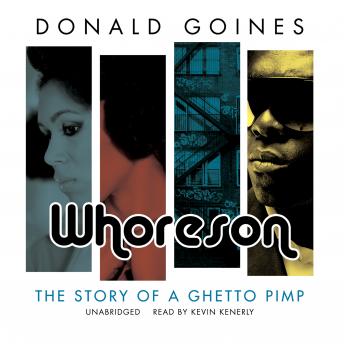 Whoreson: The Story of a Ghetto Pimp

Download or Stream instantly more than 55,000 audiobooks.
Listen to "Whoreson: The Story of a Ghetto Pimp" on your iOS and Android device.

From one of the most revolutionary writers of the twentiethcentury comes the uncensored and gritty novel that inspired today's street litand hip-hop culture.
After my ninthbirthday, I began to really understand the meaning of my name. I began tounderstand just what my mother was doing for a living. There was nothing Icould do about it, but even had I been able to, I wouldn't have changed it.
Whoreson Jones is the son of a beautiful blackprostitute and an unknown white john. As a child, he's looked after by hisneighborhood's imposing matriarch, Big Mama, while his mother works. At age twelve,his street education begins when a man named Fast Black schools him in trickology.By thirteen, Whoreson's a cardsharp. By sixteen, his childhood abruptly ends,and he is a full-fledged pimp, cold-blooded and ruthless, battling tounderstand and live up to his mother's words: "First be a man, then be a pimp."