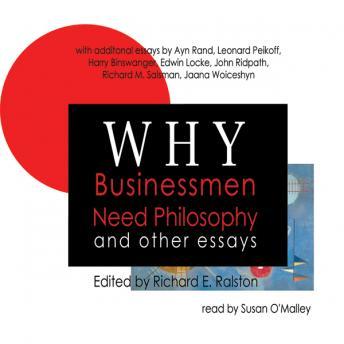 Why Businessmen Need Philosophy and Other Essays

Download or Stream instantly more than 55,000 audiobooks.
Listen to "Why Businessmen Need Philosophy and Other Essays" on your iOS and Android device.

"Ideas are the greatest and most crucially practical power on earth," wrote Ayn Rand. In the title essay of this collection, Leonard Peikoff applies this principle to the world of business. He shows that certain philosophic ideas, such as reason, egoism, and individualism, are needed to defend and protect the freedom of businessmen, while the opposite ideas, such as mysticism, altruism, and collectivism (which dominate our universities), destroy that freedom. Other essays in this volume will help businessmen understand the crucial role of philosophy in free trade, free markets, health care, and business ethics.
Why Businessmen Need Philosophy is important reading for any businessman who wants to defend his freedom-and anyone else who wants to understand and defend business.