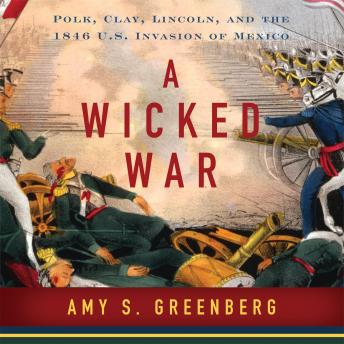 A Wicked War: Polk, Clay, Lincoln and the 1846 U.S. Invasion of Mexico

Download or Stream instantly more than 55,000 audiobooks.
Listen to "A Wicked War: Polk, Clay, Lincoln and the 1846 U.S. Invasion of Mexico" on your iOS and Android device.

Our 1846 war with Mexico was a blatant land grab provoked by President James Polk. And while it secured the entire Southwest and California for America, it also exacerbated regional tensions over slavery, created the first significant antiwar movement in America, and helped lead the nation into civil war. A Wicked War is the definitive history of this conflict that turned America into a continental power. Amy Greenberg describes the battles between American and Mexican armies, but also delineates the political battles between Democrats and Whigs-the former led by the ruthless Polk, the latter by the charismatic Henry Clay, and a young representative from Illinois named Abraham Lincoln, who initially drew national attention as a critic of the war. Greenberg brilliantly recounts this key chapter in the creation of the United States, evoking time, place, event, and personality with equal parts authority and narrative flair.