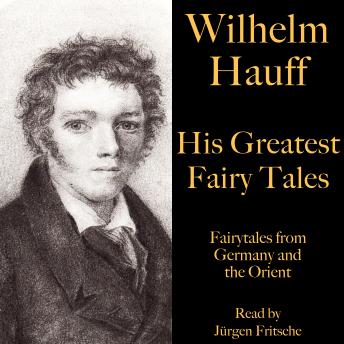 Wilhelm Hauff: His Greatest Fairy Tales: Fairytales from Germany and the Orient

Download or Stream instantly more than 55,000 audiobooks.
Listen to "Wilhelm Hauff: His Greatest Fairy Tales: Fairytales from Germany and the Orient" on your iOS and Android device.

Wilhelm Hauff's most popular fairytales are collected here! Listen to beautiful tales full of suspense like The story of the stag florin, The haunted ship, The story of the hewn-off hand, Fatima's deliverance, Little Muck, Dwarf Long-Nose, How the caliph became a stork, and A heart of stone! Included: A pdf document with track list!