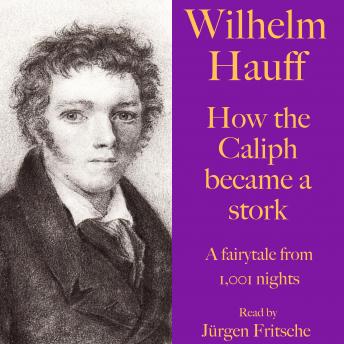 Wilhelm Hauff: How the Caliph became a stork: A fairytale from 1,001 nights

Download or Stream instantly more than 55,000 audiobooks.
Listen to "Wilhelm Hauff: How the Caliph became a stork: A fairytale from 1,001 nights" on your iOS and Android device.

The caliph is a happy man, living a comfortable life. One day, he is offered a magic powder, which gives him the power to change his form into whatever being he wants! Eagerly, he and his vizier change into storks – but then forget the magic word that makes them human again... Aimlessly, they wander through the world, until they chance upon another animal – and it seems that this animal might be able to help them! Will they be lucky? Find out by listening to one of Wilhelm Hauff's most famous fairytales from the Orient!