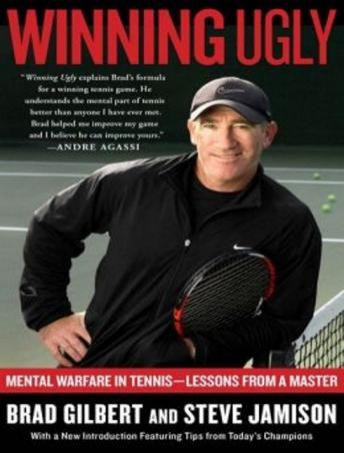 Winning Ugly: Mental Warfare in Tennis---Lessons from a Master

Download or Stream instantly more than 55,000 audiobooks.
Listen to "Winning Ugly: Mental Warfare in Tennis---Lessons from a Master" on your iOS and Android device.

He's been called the best in the world at the mental game of tennis. Brad Gilbert's strokes may not be pretty, but looks aren't everything. He has beaten the Tour's biggest names-all by playing his 'ugly' game.Now, in Winning Ugly, Gilbert teaches recreational players how to win more often without necessarily even changing their strokes. The key to success, he says, is to become a better thinking player-to recognize, analyze, and capitalize. That means outthinking opponents before, during, and after a match; forcing him or her to play your game. Gilbert's unconventional advice includes:How to identify the seven 'Hidden Ad Points,' and what to do when they come upSix reasons why you should never serve firstHow to beat a lefty, a retriever, a serve-volley player, and other troublesome opponentsHow to keep a lead or stop a match from slipping awayHow to handle psyching and gamesmanshipWinning Ugly is an invaluable combat manual for the court, and its tips include 'some real gems,' according to Tennis magazine. Ultimately, Winning Ugly will help you beat players who have been beating you.