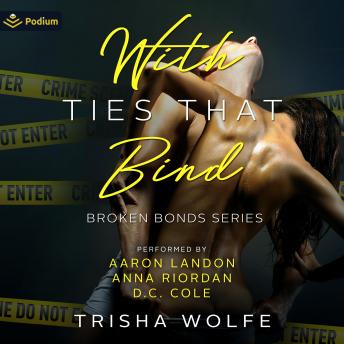 Download or Stream instantly more than 55,000 audiobooks.
Listen to "With Ties that Bind: Broken Bonds, Book 2" on your iOS and Android device.

'Detective Ethan Quinn has questions. The Arlington Slasher case is closed, the UNSUB no longer a threat — but Quinn can’t quiet the suspicion he harbors toward his partner and the young, attractive ME. Not only does he loathe his uncertainty, he’s torn between doing his job and protecting his team.


Burying himself in cases no longer works. He’s restless. On edge. And tired of fighting his compulsions. Quinn has always viewed the law in black and white. Only now his world is swirling with a murky gray that threatens to devour him.


When lead medical examiner Avery Johnson careens toward a dangerous path, she pulls the unwitting detective into a dark web of deception and lust, triggered by a spree of recent killings.


Is this new player linked to the Bathory murders, or is it another copycat?


Time almost took Avery from him once before. As the clock ticks, Quinn will stop at nothing to protect her, refusing to let Avery become a victim again. Against his uncompromising logic, Quinn can’t deny his feelings. Avery forces him to acknowledge his darker desires, tempting his control — which weakens with every second he spends with the feisty ME as they hunt down the perpetrator threatening to tear them apart.