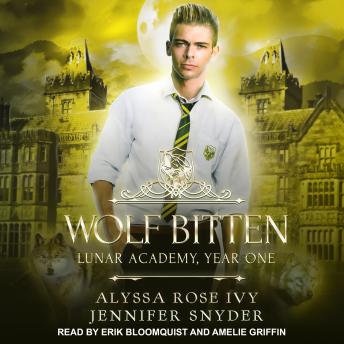 Download or Stream instantly more than 55,000 audiobooks.
Listen to "Wolf Bitten: Lunar Academy, Year One" on your iOS and Android device.

Four houses. Traditions. Secrets. And romance waiting at every turn. Welcome to Lunar Academy. Which house will you Choose?

Tori Ballard chose to become a wolf. For as long as she could remember it was something she'd wanted. The problem: her wolf is impulsive and free-spirited. She relies on instincts and not much else, which isn't how Tori moves through life. She prefers structure, schedules, and knowing things well in advance. Until she decides to give in to the sexy southern guy fate seems to be forcing her way.

Holt Taylor had a solid plan for his life until it evaporated when he was attacked and bitten. Now he's part wolf and enrolled at the academy. He still feels angry, lost, and as though he's spiraling. There are only a few things that can put him back on solid ground-fight club, cardio, and Tori. Even if she doesn't know it yet.

When the two find themselves pulled into something bigger than anything they've ever been a part of, they must focus on their future while trying to contain the passion brewing between them.