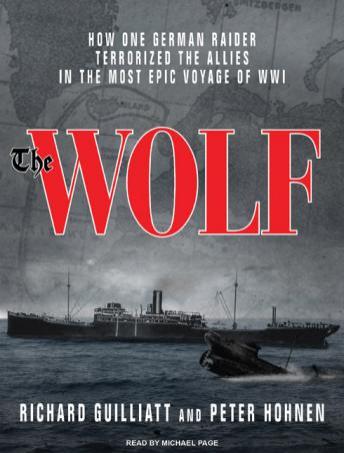 The Wolf: How One German Raider Terrorized the Allies in the Most Epic Voyage of WWI

Download or Stream instantly more than 55,000 audiobooks.
Listen to "The Wolf: How One German Raider Terrorized the Allies in the Most Epic Voyage of WWI" on your iOS and Android device.

In 1916, a nondescript freighter left Germany carrying 465 submarine mines, 16 torpedoes, 8 cannons, 1,400 shells, a seaplane, and 346 men who believed they were embarking on a suicide mission. That ship became known to Allied forces as the Wolf, and by the time it returned to Germany more than a year later it was home to more than 800 men, women, and children from twenty-five different nations, including its own crew.

Led by Captain Karl August Nerger, an honorable man who sank more than thirty Allied ships but spared the crews and passengers on board by taking them prisoner, the Wolf traveled 64,000 miles and remained at sea for fifteen months without pulling into port. Capturing 400 prisoners, the Wolf became home to an extraordinary collection of humanity, from the secret lover of W. Somerset Maugham to a six-year-old American girl who was adopted as a mascot by the German crew. Forced to survive on plundered food, facing death from scurvy, and hunted by the combined navies of five Allied nations, the Germans and their prisoners came to share a close bond.

The Wolf is a gripping war narrative, painting a rich, detailed picture of a world profoundly shaped by global conflict.