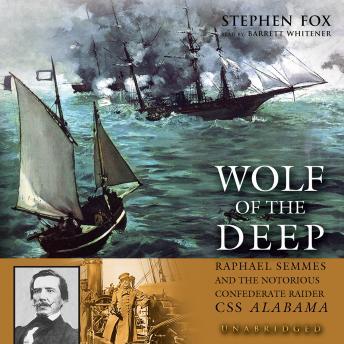 Wolf of the Deep

Download or Stream instantly more than 55,000 audiobooks.
Listen to "Wolf of the Deep" on your iOS and Android device.

In July 1862, Confederate Captain Raphael Semmes took command of a secret new warship. At the helm of the Alabama, he became the most hated and feared man along the Union coast, as well as a Confederate legend. Now, with unparalleled authority, depth, and a vivid sense of the excitement and danger of the time, Stephen Fox describes Captain Semmes’ remarkable wartime exploits.
Burning one Union ship after another, he eluded capture time and again, ravaging Union commerce. But when the tide turned in favor of the Union, foreign ports were less willing to take in the Alabama—forcing Semmes to wander the oceans on a deteriorating ship, his ability to outwit the Union captains diminishing rapidly. Finally, in 1864, a Union ship sunk the Alabama—though not her captain—in a world-renowned battle.