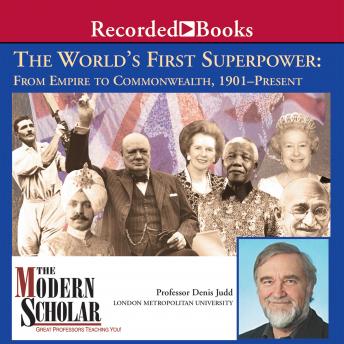 Download or Stream instantly more than 55,000 audiobooks.
Listen to "World's First Superpower: From Empire to Commonwealth, 1901Present" on your iOS and Android device.

Professor Denis Judd-London Metropolitan University In the second part of a two-part course on the nearly six-century- long history of the British Empire, Professor Denis Judd picks up the narrative at the beginning of the 20th century. The fascinating saga unfolds from the death of Queen Victoria, through the First World War, the resulting tensions and divisions created within the Empire after the war, the enormous energy and resources the Empire used to fight World War II, and the final solution of Commonwealth reached in its aftermath and to the present day.