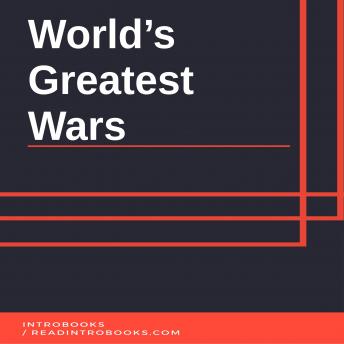 Download or Stream instantly more than 55,000 audiobooks.
Listen to "World's Greatest Wars" on your iOS and Android device.

Wars are one of the defining characteristics of human psyche. They have, through bloodshed, chaos and ultimately suffering, pushed the human civilisation forward and still continue to do so. They are the means through which civilisations have defined themselves and paved the way for pages of history to become an eternal entity. Wars are perhaps the only event that have created as well as dissolved borders for new eras to stay in continuance.


Since such events have defined landmark stones in human history, it becomes essential to understand the causes and the purposes behind them and the socio-political results that followed. However, defining a 'great war' is a multi-faceted aspect and can be a difficult task from a historical point of view. Certain conflicts that have witnessed the lowest loss to human life have at many times extended till several decades and even centuries. Can they be regarded as great? Can such events be regarded as permanent memories that extended for not more than a couple of months or years but witnessed some of the largest losses to human life? In this compilation, some of the greatest human conflicts have been presented with the sole purpose to not only appreciate the socio-political and historical aftermath that followed after them but also to appreciate the scars that got left behind, for without scars, no page of history has ever been written. Like the old Latin maxim, "there is no peace without war" suggests, human civilisation indeed is written down through the annals of conflict and resolution.


The compilation starts with the 2nd World War, undoubtedly the greatest war in civilizationalhistory, in both scale, historical repercussions and damage incurred to both human and public life, with permanent transformations across the globe. This great war of 1937-45 was a result of the 1st World War, another great conflict encompassing much of the globe and the father of 2nd World War, and that cannot be ignored. The methodology to define a credible great warcan have several factors, and hereit has been comprised of dependents such as origins of the conflict, scale and influence over affected factions, regions, communities and peoples, approximate damage dealt to human life and most importantly, their socio-political repercussions. The book is sub-divided into several chapters corresponding to these conflicts with only brief historical perspectives and information. This is important since the last 5,000 years have seen countless number of large-scale conflicts involving millions of lives and even more. However, since the book addresses only the deadliest and greatest wars of civilisation, only a select few have been included in the list.