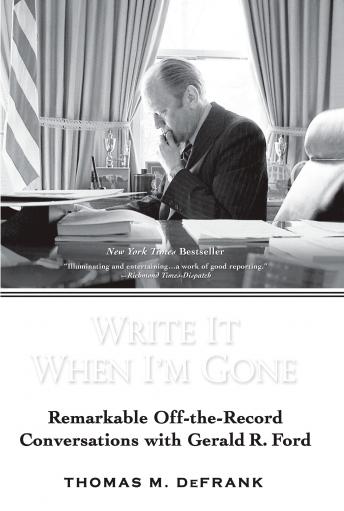 Write it When I'm Gone

Download or Stream instantly more than 55,000 audiobooks.
Listen to "Write it When I'm Gone" on your iOS and Android device.

The New York Times bestseller?and the candid voice of an American president

In 1974, Newsweek correspondent Thomas M. DeFrank was interviewing Gerald Ford when the Vice President blurted out something astonishingly indiscreet. He then extracted a promise not to publish it. ?Write it when I?m dead,? Ford said? and thus began a thirty-two-year relationship.

During the last fifteen years of their conversations, Ford opened up to DeFrank, speaking in a way few presidents ever have. Here the award-winning journalist reveals these private talks, as Ford discusses his experiences with his fellow presidents, the Warren Commission, and his exchanges with Bill Clinton during the latter?s impeachment process. In addition, he shares his thoughts about both Bush administrations, the Iraq war, his beloved wife Betty, and the frustrations of aging. Write It When I?m Gone is not only a historical document but an unprecedented portrait of a president.