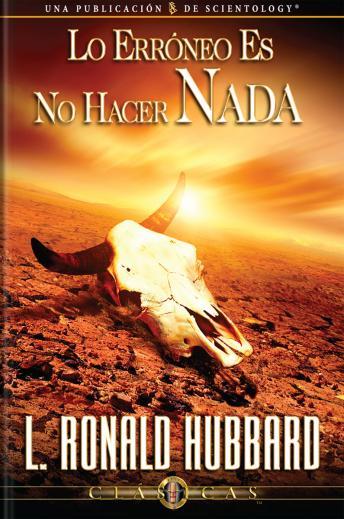 The Wrong Thing To Do Is Nothing (Spanish edition)

Download or Stream instantly more than 55,000 audiobooks.
Listen to "The Wrong Thing To Do Is Nothing (Spanish edition)" on your iOS and Android device.

The Wrong Thing to Do Is Nothing

Here we are surrounded in this society by lots of
people who say, 'Oh well, there's nothing I can do
about it.' But clearly to me, this is and seems to be
a situation that one can't say that about. For the
first time we're faced with the fact that, the absolute
fact, that exactly the wrong thing to do is nothing.
- L. Ron Hubbard

I n a world of unpredictable forces racing headlong toward an uncertain future, how can a single individual control his own fate? How can he safeguard the well"'being of his family, the prosperity of his group and the security of his nation?

Must he mutely await the next unforeseen blow, which
might well signal the end of all dreams and aspirations? Or
should he endeavor by whatever means, through whatever
plan, to secure the future for those he cherishes and the
society in which he lives?

Here, then, is Ron's unforgettable answer to such
questions. What he reveals is not only a principle that
spells the difference between success and failure in every
aspect of life, it is also a fundamental truth by which we
can guarantee our future survival as individuals, groups,
nations and Mankind as a whole.