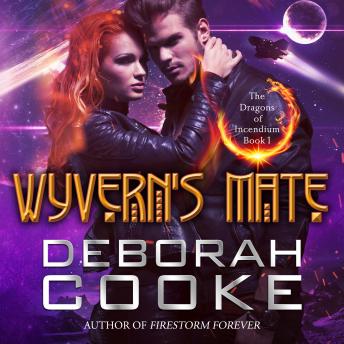 Download or Stream instantly more than 55,000 audiobooks.
Listen to "Wyvern's Mate" on your iOS and Android device.

Troy will do whatever is necessary to earn his freedom from solitary confinement on the penal colony of Xanto, even assassinate a princess of Incendium. Being a MindBender, he has a serious advantage as a predator and thinks the princess in question doesn’t have a chance. Only one of them can survive and Troy knows who it will be—until he meets Drakina.

Royal dragon shifter Drakina has a quest of her own, to seduce her destined mate and conceive the crown prince of Incendium. Her father will free her from all other responsibilities if she completes this one task. Drakina craves her independence enough to seduce the unattractive Terran who is the Carrier of the Seed. She’s sure it will be a quick seduction—until she meets Troy.

Worlds collide when Troy and Drakina meet, and passion flares. The attraction is so powerful that they both choose to put their goals aside for one night of passion together. When their respective secrets are revealed, will the truth turn one against the other? Or will destiny allow this star-crossed pair to save each other and their unborn son?