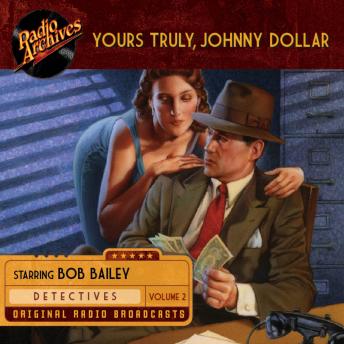 Download or Stream instantly more than 55,000 audiobooks.
Listen to "Yours Truly, Johnny Dollar, Volume 2" on your iOS and Android device.

Volume 2. "Yours Truly, Johnny Dollar" began in 1949 as a typical slam-bang detective series and, though consistently well written and acted, the series never really captured an enthusiastic audience. However, in the fall of 1955, Bob Bailey took over the title role, veteran director Jack Johnstone and writers John Dawson, Robert Ryf, and Les Crutchfield joined the production team, and the series was transformed into a quarter-hour, five-a-week "strip" show. The result was a rebirth for "America's favorite freelance insurance investigator", as Bailey assumed the role of a lifetime, the writers had the chance to develop the depth of the stories, and the new cliffhanging nature of the series made radio's dwindling listening audience want to tune in day after day.