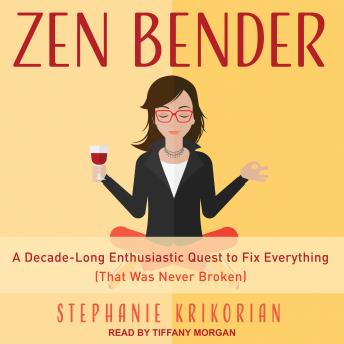 Zen Bender: A Decade-Long Enthusiastic Quest to Fix Everything (That Was Never Broken)

Download or Stream instantly more than 55,000 audiobooks.
Listen to "Zen Bender: A Decade-Long Enthusiastic Quest to Fix Everything (That Was Never Broken)" on your iOS and Android device.

Forty, chronically single, and up an extra twenty pounds, TV news producer Stephanie Krikorian fell victim to The Great Recession, finding herself suddenly unemployed. One unwanted pregnancy away from being a Lifetime Original Movie, Stephanie had to reinvent herself . . . and fast. So, to keep her head above water, she started ghostwriting self-help and diet books for a variety of well-known experts. However, she didn't just write each book she took on, she lived it-chanting, journaling, reflecting, reframing-whatever it took to get deep into the heart of each project. And then, as her ghost-writing business grew, she started reading other self-help books as well-for 'research.' Or so she told herself. That's when things went next level.

Overwhelmed by the sheer number of life fixes available, Stephanie scrambled to plug the multiple holes that surely must have existed in her mind, body, and soul. She went on what turned out to be a near decade long Zen Bender. She hit the guru circuit hard, like it was her job-no psychic, class, coach, fixer, or self-help book left behind.

Zen Bender is a collection of witty, moving, insightful stories, bookended with both the zany words of wisdom Stephanie picked up during her decade seeking personal growth and enlightenment, and some more concrete, grounded advice of her own.