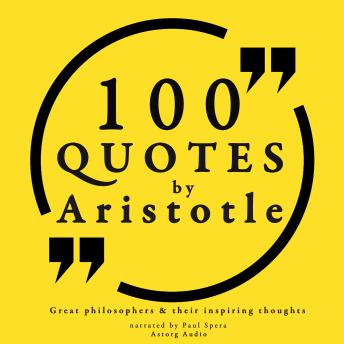 Download or Stream instantly more than 55,000 audiobooks.
Listen to "100 quotes by Aristotle: Great philosophers & their inspiring thoughts" on your iOS and Android device.

Pupil of the great Plato, teacher of Alexander the Great, Aristotle is a massively influential figure in Western philosophy. Cicero described his literary style as "a river of gold". Modern ethics are based on his ideas about virtue; his writings literally encompassed all the scientific knowledge of the time and beyond, so much that many of his findings were still considered cutting-edge many century afterwards. Aristotle also shaped modern logic, and put his mark on all subsequent philosophy and theology. We have selected for you 100 of his most profound and influent quotes, so that you can see for yourself how modern these fundamental ideas still are. Nourish your daily life with Aristotle's Ethics, strengthen your thoughts with his Logic, and adopt his scientific ways for a clearer life.