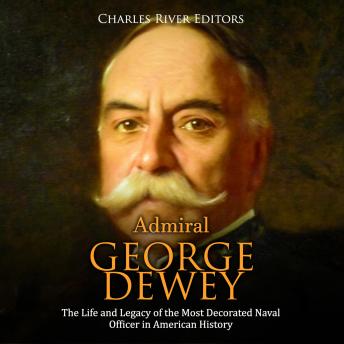 Admiral George Dewey: The Life and Legacy of the Most Decorated Naval Officer in American History

Download or Stream instantly more than 55,000 audiobooks.
Listen to "Admiral George Dewey: The Life and Legacy of the Most Decorated Naval Officer in American History" on your iOS and Android device.

"Didn't Admiral Dewey do wonderfully well? I got him the position out there in Asia last year, and I had to beg hard to do it; and the reason I gave was that we might have to send him to Manila. And we sent him - and he went!" - Theodore Roosevelt, 1898
In 1898, one of Spain's last possessions in the New World, Cuba, was waging a war for independence, and though Cuba was technically exempted from the Monroe Doctrine because it was already a Spanish territory when the Monroe Doctrine was issued, many Americans believed that the United States should side with Cuba against Spain.
Initially, Republican President William McKinley wanted to avoid any wars, and for its part, Spain also wanted to avoid any conflict with United States and its powerful navy. However, Spain also wanted to keep Cuba, which it regarded as a province of Spain rather than a colony. Cuba was very important to the Spanish economy as well, as it produced valuable commodities such as sugar and also had a booming port at Havana.
The Spanish-American War was famously labeled a "splendid little war." by John Hay, U.S. Ambassador to the United Kingdom, in a letter to Theodore Roosevelt, and while it is often overlooked today due to its brief and one-sided nature, the conflict produced one of the most popular military heroes in American history. While many are familiar with Roosevelt and his Rough Riders, the naval exploits of George Dewey were seemingly nothing short of miraculous. A former veteran of various naval engagements in the Civil War, Dewey managed to find himself in charge of the Asiatic Squadron, and in its most famous battle at Manila Bay, Dewey scored a decisive victory that destroyed Spain's Pacific fleet and subdued Manila's shore batteries while suffering just one American death. Dewey's success in the war led to ticker tape parades upon his return to America, and he was so popular that he briefly ran for president in 1900.