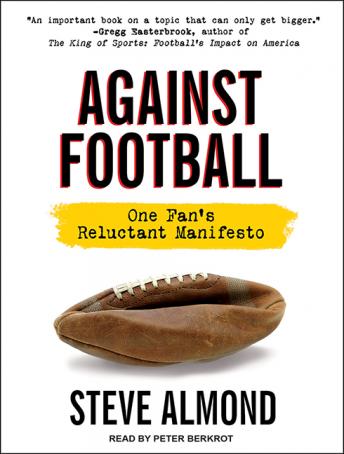 Against Football: One Fan's Reluctant Manifesto

Download or Stream instantly more than 55,000 audiobooks.
Listen to "Against Football: One Fan's Reluctant Manifesto" on your iOS and Android device.

In Against Football, Steve Almond details why, after forty years as a fan, he can no longer watch the game he still loves. Using a synthesis of memoir, reportage, and cultural critique, Almond asks a series of provocative questions:


Does our addiction to football foster a tolerance for violence, greed, racism, and homophobia?
What does it mean that our society has transmuted the intuitive physical joys of childhood-run, leap, throw, tackle-into a billion-dollar industry?
How did a sport that causes brain damage become such an important emblem for our institutions of higher learning?


There has never been a book that exposes the dark underside of America's favorite game with such searing candor.