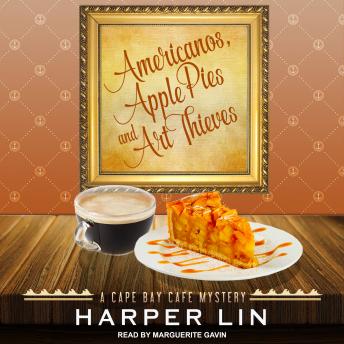 Download or Stream instantly more than 55,000 audiobooks.
Listen to "Americanos, Apple Pies, and Art Thieves" on your iOS and Android device.

It's almost Thanksgiving, and Fran is baking her family's famous apple pies for the cafe. While pie fever spreads through Cape Bay, a world-famous artist holds a special art show in the town's modest museum in honor of his late mother, who grew up there.

Louis Cliffton's paintings are encrusted with valuable gems and gold. At the opening night, the centerpiece of the show is stolen. When Fran investigates the case, she receives threats, and someone follows her home and vandalizes her cafe.

What kind of thief would do this? A crazy outsider-or someone from her very own town?