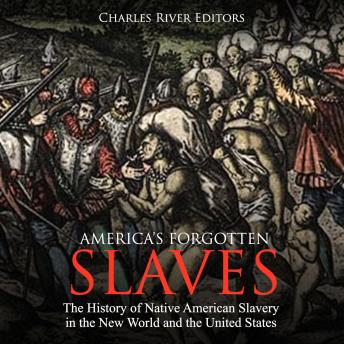 America's Forgotten Slaves: The History of Native American Slavery in the New World and the United States

Download or Stream instantly more than 55,000 audiobooks.
Listen to "America's Forgotten Slaves: The History of Native American Slavery in the New World and the United States" on your iOS and Android device.

The African slave trade is a complex and deeply divisive subject that has had a tendency to evolve according the political requirements of any given age, and is often touchable only with the correct distribution of culpability. It has for many years, therefore, been deemed singularly unpalatable to implicate Africans themselves in the perpetration of the institution, and only in recent years has the large-scale African involvement in both the Atlantic and Indian Ocean Slave Trades come to be an accepted fact. There can, however, be no doubt that even though large numbers of indigenous Africans were liable, it was European ingenuity and greed that fundamentally drove the industrialization of the Transatlantic slave trade in response to massive new market demands created by their equally ruthless exploitation of the Americas.

What far less people are familiar with are the other forms of slavery in America, and the victims who were enslaved. Sizable numbers of Native Americans were enslaved, with some of them working alongside African slaves in the fields and others shipped off to the sugar islands. The total number of natives enslaved over the whole colonial period for both American continents is estimated at somewhere between 2.4 and 4.9 million, while estimates for North America north of Mexico are 141,000 to 340,000. These estimates do not seem to include slaves held by the native peoples themselves, nor do they include the serf-like status still a bit short of slavery that was imposed on millions of others.