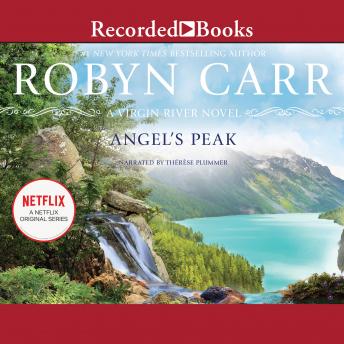 Download or Stream instantly more than 55,000 audiobooks.
Listen to "Angel's Peak" on your iOS and Android device.

Robyn Carr's bestselling Virgin River series captivates fans with stories of young men and women given second chances at romance in a small northern California town. Here an ex-fighter pilot attempts to rekindle a love he once thought lost forever. Four years ago, Sean couldn't commit to Franci, so she walked away. In their time apart, Sean grew up and he's since returned to town. Out one night, Sean runs into her and finds his heart stirred. But he's even more surprised to learn that she hid a secret after their breakup-a now three-year-old secret blessed with Sean's green eyes. With Sean outraged over her deception and Franci unwilling to risk another heartbreak, it will take a miracle to rebuild their relationship-but stranger things have happened in Virgin River. An impeccable romance complemented by Thérèse Plummer's rousing narration, Angel's Peak will have listeners cheering for true love's triumph over seemingly insurmountable odds