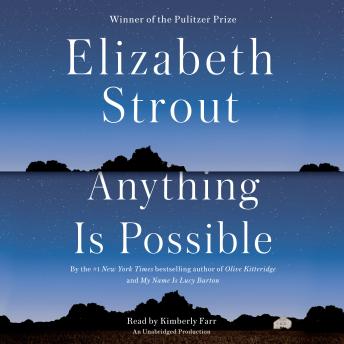 Anything Is Possible: A Novel

Download or Stream instantly more than 55,000 audiobooks.
Listen to "Anything Is Possible: A Novel" on your iOS and Android device.

“This book, this writer, are magnificent.”—Ann Patchett

Recalling Olive Kitteridge in its richness, structure, and complexity, Anything Is Possible explores the whole range of human emotion through the intimate dramas of people struggling to understand themselves and others.

Here are two sisters: One trades self-respect for a wealthy husband while the other finds in the pages of a book a kindred spirit who changes her life. The janitor at the local school has his faith tested in an encounter with an isolated man he has come to help; a grown daughter longs for mother love even as she comes to accept her mother’s happiness in a foreign country; and the adult Lucy Barton (the heroine of My Name Is Lucy Barton, the author’s celebrated New York Times bestseller) returns to visit her siblings after seventeen years of absence.

Reverberating with the deep bonds of family, and the hope that comes with reconciliation, Anything Is Possible again underscores Elizabeth Strout’s place as one of America’s most respected and cherished authors.