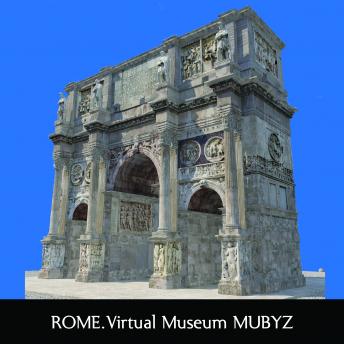 Download or Stream instantly more than 55,000 audiobooks.
Listen to "Arch of Costantine. Rome. Italy" on your iOS and Android device.

The audioguide tells the story, describes the architecture and reports interesting facts about the triumphal arch of Constantine, in Rome, between the Colosseum and the Palatine, and was made by the founder of Constantinople.

The three-hole arc was built in the years 312-315 to celebrate Constantine's victory over Massenzio, in the battle fought at Milvio bridge, but also the tenth anniversary of the Emperor's government. The arch of Constantine is the latest of the three triumphal arches surviving in Rome. To decorate it, new bas-reliefs were created, but mostly decorative burial elements were used, drawn from older monuments, probably destroyed by the fires of 283 and 307 AD.

The Arch of Constantine is like a big book that shows us more than two centuries of Roman art.
This magnificent work of art has been preserved to this day due to the fact that Constantine was considered the first Christian Emperor. It is no coincidence that, in his dedication, his victory is presented as the fulfillment of God's will. That is why the triumphal arch did not suffer the fate of many pagan monuments, although there are traces of that culture. Until the end of the 15th century the monument was studied and restored, several times.

In 1530 Lorenzino de Medici was expelled from Rome for daring to mutilate some of the heads of the bas-reliefs. The heads were reintegrated only in the 18th century. You can examine the 3D model of the church and observe its interior through the MuByz App. The audioguide has been made by professionals in the field of history and art.