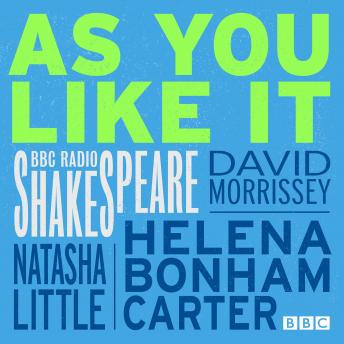 As You Like It: A BBC Radio Shakespeare production

Download or Stream instantly more than 55,000 audiobooks.
Listen to "As You Like It: A BBC Radio Shakespeare production" on your iOS and Android device.

In this BBC full-cast production of As You Like It, Rosalind is banished from the Royal court, heartbroken over Orlando. Will the two find a way to reunite?

A comedy of wit, disguise and love, Shakespeare's tale about the enchanted world of the Forest of Arden remains as moving as it is funny.

Helena Bonham Carter stars as Rosalind, with David Morrissey as Orlando and Natasha Little as Celia.

BBC radio has a unique heritage when it comes to Shakespeare. Since 1923, when the newly-formed company broadcast its first full-length play, generations of actors and producers have honed and perfected the craft of making Shakespeare to be heard.

In this acclaimed BBC Radio Shakespeare series, each play is introduced by Richard Eyre, former Director of the Royal National Theatre. Revitalised, original and comprehensive, this is Shakespeare for the modern day.