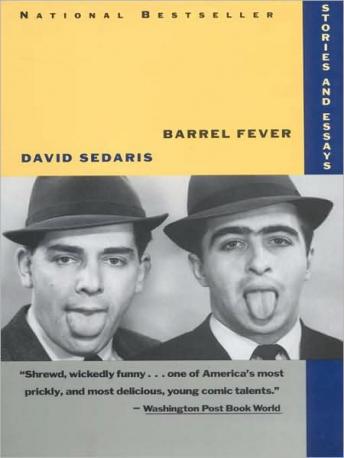 Barrel Fever and Other Stories

Download or Stream instantly more than 55,000 audiobooks.
Listen to "Barrel Fever and Other Stories" on your iOS and Android device.

In David Sedaris' world, no one is safe and no cow is sacred. A manic cross between Mark Leyner, Fran Lebowitz, and the National Enquirer, Sedaris' collection of essays is a rollicking tour through the national Zeitgeist: a do-it-yourself suburban dad saves money by performing home surgery; a man who is loved too much flees the heavyweight champion of the world; a teenage suicide tries to incite a lynch mob at her funeral; a bitter Santa abuses the elves.
David Sedaris made his debut on NPR's Morning Edition with 'SantaLand Diaries', recounting his strange-but-true experiences as an elf at Macy's, and soon became one of the show's most popular commentators. With a perfect eye and a voice infused with as much empathy as wit, Sedaris writes stories and essays that target the soulful ridiculousness of our behavior. Barrel Fever is like a blind date with modern life, and anything can happen.