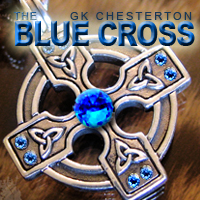 Download or Stream instantly more than 55,000 audiobooks.
Listen to "The Blue Cross" on your iOS and Android device.

The Blue Cross is the first Father Brown short story by Chesterton, who went on to write an entire series of Father Brown Mysteries. In this story, Aristide Valentin, head of the Paris Police, is on the trail of the world's most famous criminal, Flambeau, who is a master of disguise, and may appear to be anyone. Valentin deduces that Flambeau is going to try and steal The Blue Cross, a priceless silver cross with precious blue stones. Valentin must stop him, but in this case it is actually Father Brown who is the better detective.