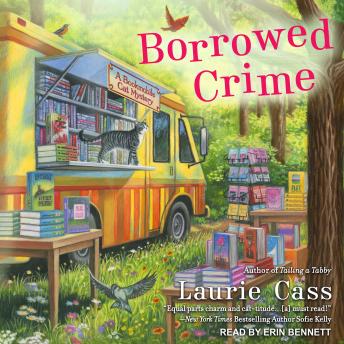 Download or Stream instantly more than 55,000 audiobooks.
Listen to "Borrowed Crime" on your iOS and Android device.

Librarian Minnie Hamilton spreads the joy of reading throughout Chilson, Michigan, with her bookmobile, but she doesn't ride alone. Her rescue cat, Eddie, and a group of volunteers are always on board to deliver cheer-until one of her helpers gets checked out for good . . .

When Minnie loses a grant that was supposed to keep the bookmobile running, she's worried her pet project could come to its final page. But she's determined to keep her patrons-and Eddie's fans-happy and well read. She just needs her boss, Stephen to see things her way, and make sure he doesn't see Eddie. The library director doesn't exactly know about the bookmobile's furry co-pilot.

But when a volunteer dies on the bookmobile's route, Minnie finds her traveling library in an even more precarious position. Although the death was originally ruled a hunting accident, a growing stack of clues is pointing towards murder. It's up to Minnie and Eddie to find the killer, and fast-before the best chapter of her life comes to a messy close . . .