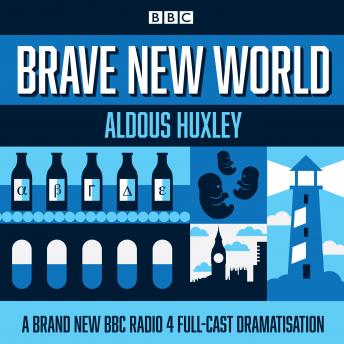 Download or Stream instantly more than 55,000 audiobooks.
Listen to "Brave New World: A BBC Radio 4 full-cast dramatisation" on your iOS and Android device.

A gripping BBC Radio 4 full-cast dramatisation of Aldous Huxley's classic dystopian novel
It's 2116, and Bernard Marx and Helmholtz Watson are token rebels in an irretrievably corrupted society where promiscuity is the norm, eugenics a respectable science, and morality turned upside down. There is no poverty, crime or sickness - but no creativity, art or culture either. Human beings are merely docile citizens: divided into castes, brainwashed and controlled by the state and dependent on the drug soma for superficial gratification.

Into this sterile society comes an outsider, John - a man born into squalor and suffering, but raised on The Complete Works of William Shakespeare, a book which has shaped his entire life. When he discovers that treasured ideals such as love mean nothing in this 'brave new world', where romance is ridiculous, marriage shocking and parenthood shameful, John's world is shattered - and his reaction will show Bernard and Helmholtz what rebellion really means...

'...outstanding, right from the cheery music that kicks the thing off through to all the subtle sound effects that help to set the scenes perfectly'