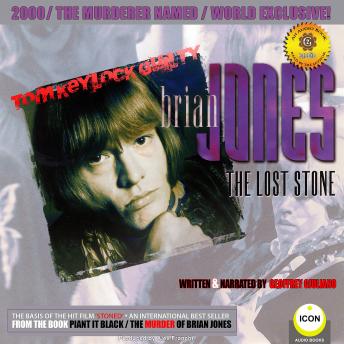 Download or Stream instantly more than 55,000 audiobooks.
Listen to "Brian Jones The Lost Stone" on your iOS and Android device.

NO JONES - NO STONES!
The founder, heart, and soul of the fabulous Rolling Stones, Brian Jones, died far too young under very mysterious circumstances at the age of only 27 in his backyard (only medium size) swimming pool. Was it an accident, a run of the mill pop star drug overdose, mischievous misadventure, or evil premeditated murder?
Author actor narrator Geoffrey Giuliano has been investigating this strange case for over 30 years now, having published several popular books, audiobooks, and even the iconic feature motion picture Stoned in 2006 about the tragic life and times of one of pop's most talented progenitors. Here, at last, is the final truth of what happened on that long ago steaming summers night in July of 1969.
A must-have for all dedicated conspiracy buffs, music fans, pop philosophers, and all inspired university and school systems. This phenomenal audiobook is the final word on one of the greatest foundational artists of popular music the world has ever known. Here is, for all time, the true story of Brian Jones. God bless you, Brian, and thank you!
Hosted by Geoffrey Giuliano in Vrn
Produced by India Juliana in Bejing
Edited and mixed by Macc Kay in Bangkok
Project Coordinator Alex Franchi in Milan
Executive In Charge Of Production Avalon Giuliano in London
ICON Intern Eden Giuliano in Delhi
Special thanks to Brandon Stickney
Dedicated to H. G. Srimati Vrndarani Devi Dasi Maharani 1953-2017
Music By AudioNautix With Their Kind Permission
©2017 Icon Audio Arts (P)2017 Icon Audio Arts