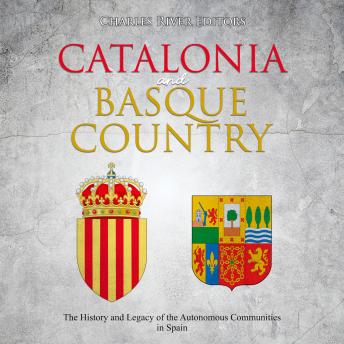 Catalonia and Basque Country: The History and Legacy of the Autonomous Communities in Spain

Download or Stream instantly more than 55,000 audiobooks.
Listen to "Catalonia and Basque Country: The History and Legacy of the Autonomous Communities in Spain" on your iOS and Android device.

Shaped like an uneven triangle, Catalonia is comprised of four provinces that occupy an area of 12,390 square miles: Girona, Barcelona, Tarragona and Lleida. Catalonia also has a variety of different kinds of communities surrounding it, as its northern neighbors include the powerful country of France and the tiny nation of Andorra. To the south it has the autonomous community of Valencia, to the west is the autonomous community of Aragon, and on the east, it borders the Mediterranean Sea. Furthermore, there are natural boundaries that serve to divide Catalonia from its neighbors, namely the Pyrenees mountains, which separate it from France, and the pre-Pyrenees and the Ebro River basin, which mark its border with Aragon. It is home to several main rivers, including the Ter, Llobregat, and the Ebro, all of which end in the Mediterranean Sea.

It would not be a stretch to say that for a very tiny geographical territory (just 20,747 square kilometers), the Basque Country has inspired a plethora of intense stereotypes. Some of these stereotypes have been cast upon its people from the outside while others have been strategically propagated by the people themselves. For such a small area of land that is home to only 3,000,000 people, the Basque Country is anything but small in terms of its history which is why opinions about its people are so intense, so consequential, and so contradictory. The Basque people have been called “the people who sing and dance at the foot of the Pyrenees,” a description that evokes not only their geographical location but also their strong folk traditions. Those words, said by the famous French writer Victor Hugo, infuriate the Basque people to this day. They have also been described pejoratively as “Europe’s aboriginals,” a reference to the age-old status of their culture which has led many people to fetishize them and their language as ancient.