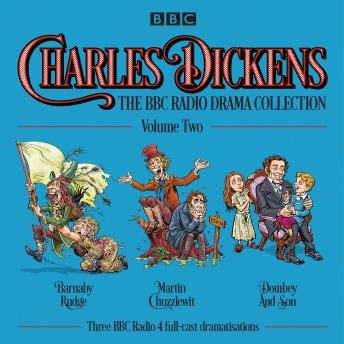 Thrilling full-cast radio dramatisations of three of Charles Dickens' classic novels. Charles Dickens is one of the most renowned novelists of all time, and this second volume of the dramatised canon of his work includes the gripping historical novel Barnaby Rudge, picaresque comedy Martin Chuzzlewit and bittersweet tale of family relationships Dombey and Son.

Barnaby Rudge Against the background of the anti-Catholic riots of the 1780s, young Barnaby Rudge becomes entangled with the fanatical George Gordon and his campaign for 'No Popery'. But mob violence, the burning of Newgate Prison and the shadow of murder put his life in danger...

Dombey and Son Wealthy Paul Dombey is desperate for a male heir to continue the family business, and neglects his six-year-old daughter Florence. Then, at last, the longed-for son is born – but Dombey's hopes for him go unfulfilled...