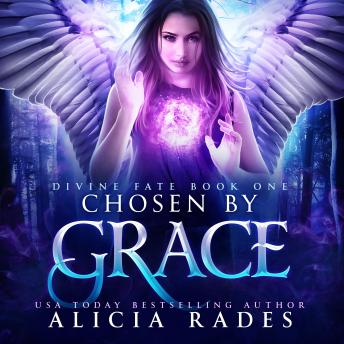 Download or Stream instantly more than 55,000 audiobooks.
Listen to "Chosen by Grace: Divine Fate Trilogy" on your iOS and Android device.

She thought the demons were in her head… until the night they attacked.

Ryn Tyler didn’t intend to kill a demon when she moved to Eagle Valley—or to become the hero of a divine race of angels. She just wants to be a normal teenager, but fate has other plans.

As she prepares to attend Galen High, a magical school for angels, Ryn navigates a complicated relationship with Marek, the guy who can’t stop saving her life. But Marek knows more about Ryn’s magic than he’s letting on.

Only Ryn has the power to stop this age-old war. But there’s a demon in Eagle Valley who wants that power for himself—and if Ryn wants to survive, she’ll have to fight back.

Now a complete audiobook series! Join the urban fantasy battle of angels versus demons. Featuring a unique twist on angels, this page-turning young adult paranormal series is packed with mystery, excitement, and romance.