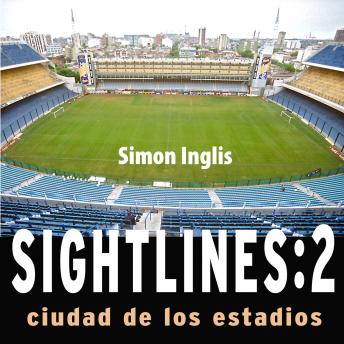 Download or Stream instantly more than 55,000 audiobooks.
Listen to "Ciudad De Los Estadios" on your iOS and Android device.

Ciudad de los Estadios (City of Stadiums) travels around the football grounds of Buenos Aires abridged from Sightlines - a Stadium Odyssey. Written and read by Simon Inglis. As soon as football writer Simon Inglis read the quote he knew what had to be done. 'We have more stadiums than public libraries,' reported a Buenos Aires newspaper, bemoaning illiteracy rates amongst the city's football fundamentalists. Digging deeper, Inglis calculated that Buenos Aires has indeed more football grounds than other city in the world. So it was that in 1998 he set off, armed with a map the size of a double bed and accompanied by a River Plate fanatic who happened also to be a pyschotherapist. From the lofty heights of Boca's Bombonera to the crumbling terraces of Sacachispas, via clubs called Arsenal, All Boys and Atlanta, encountering tangoistas, drug-fuelled hooligans and Peronists en route, here is the tale of his seven day quest. On his list, 36 canchas, or grounds. But would he get to them all? And just as importantly, would the therapy help?