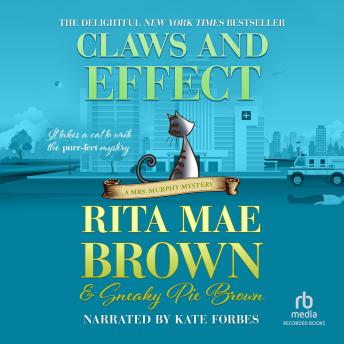 Download or Stream instantly more than 55,000 audiobooks.
Listen to "Claws and Effect" on your iOS and Android device.

Best-selling authors Rita Mae Brown and her cat, Sneaky Pie Brown, are beloved for their Mrs. Murphy mysteries. Set in the quiet town of Crozet, Virginia, each delightful book finds Mary Minor 'Harry' Haristeen and the incomparably clever feline, Mrs. Murphy, caught up in a puzzling whodunit. In the middle of a particularly dull winter, nobody pays much mind to rumors of bad blood among the staff of Crozet Hospital. That is, until a member of the hospital staff turns up dead. So much for the uneventful season! Harry can't resist doing some investigating of her own, but it's her sleuthing feline whose nose sniffs out the biggest clue. Co-written by the smartest cat to ever put paw to typewriter, Claws and Effect is a pure delight from beginning to end. With Kate Forbes narrating the voices of the human characters as well as the thoughts of the endearing animals, the audiobook is an extra special treat.