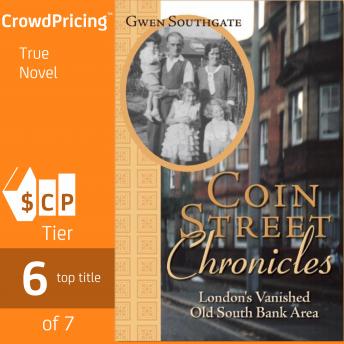 Coin Street Chronicles is a memoir that paints a picture of Britain in the 1930s and 1940s, as seen though the eyes of one for whom it was the backdrop of her childhood. The story is set in and around Coin Street, on the south bank of the River Thames. The area is now a cultural showcase known as The South Bank, but was then a gritty, Cockney-like corner of London. Stories of its colorful characters are woven throughout the narrative as they cope first with the poverty of the Depression years and then with World War II and its aftermath in the 1940s. Evacuation during the war years entails many abrupt transitions and good-byes—some sad, some glad—and much settling in to new settings that run the gamut from a remote Dorset farm to a Welsh mining town. Even after the war, the author remains a quasi-evacuee for two more years, fleeing from a difficult, violence-prone stepfather in order to continue in school. The memoir ends on the day that she heads off to university, exulting in her escape from the limiting nature of working class culture; but appalled by the wide gulf that threatens to open up between her and her feisty mother whose pluck and determination has been largely responsible for that escape.