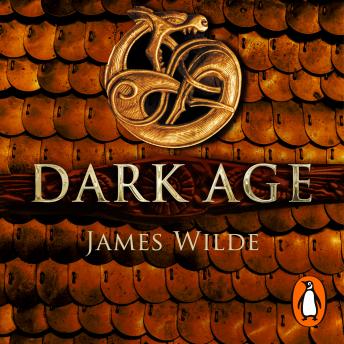 Download or Stream instantly more than 55,000 audiobooks.
Listen to "Dark Age: (Dark Age Book 2)" on your iOS and Android device.

Bridging the gap between 'Game of Thrones' and Bernard Cornwell comes the second chapter in James Wilde's epic adventure of betrayal, battle and bloodshed . . .

It is AD 367, and Roman Britain has fallen to the vast barbarian horde which has invaded from the north. Towns burn, the land is ravaged and the few survivors flee. The army of Rome - once the most effective fighting force in the world - has been broken, its spirit lost and its remaining troops shattered.

Yet for all the darkness, there is hope. And it rests with one man. His name is Lucanus who they call the Wolf. He is a warrior, and he wears the ancient crown of the great war leader, Pendragon, and he wields a sword bestowed upon him by the druids. With a small band of trusted followers, Lucanus ventures south to Londinium where he hopes to bring together an army and make a defiant stand against the invader.

But within the walls of that great city there are others waiting on his arrival - hidden enemies who want more than anything to possess the great secret that has been entrusted to his care. To seize it would give them power beyond imagining. To protect it will require bravery and sacrifice beyond measure. And to lose it would mean the end of everything worth fighting for.

Before Camelot. Before Excalibur. Before all you know of King Arthur. Here is the beginning of that legend . . .