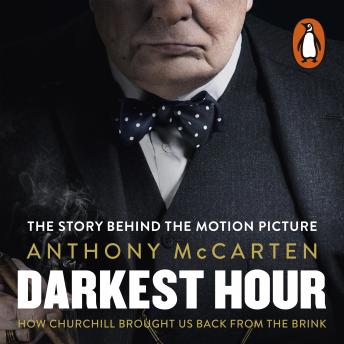 Darkest Hour: How Churchill Brought us Back from the Brink

Download or Stream instantly more than 55,000 audiobooks.
Listen to "Darkest Hour: How Churchill Brought us Back from the Brink" on your iOS and Android device.

Penguin presents the audiobook edition of The Darkest Hour by Anthony McCarten, read by Sean Barrett.

From the prize-winning screenwriter of The Theory of Everything, this is a cinematic, behind-the-scenes account of a crucial moment which takes us inside the mind of one of the world's greatest leaders - and provides a revisionist, more rounded portrait of his leadership.

May, 1940. Britain is at war, European democracies are falling rapidly and the public are unaware of this dangerous new world. Just days after his unlikely succession to Prime Minister, Winston Churchill, faces this horror - and a sceptical King and a party plotting against him. He wonders how he can capture the public mood and does so, magnificently, before leading the country to victory.

It is this fascinating period that Anthony McCarten captures in this deeply researched, gripping day-by-day (and often hour-by-hour) narrative. In doing so he revises the familiar view of Churchill - he made himself into the iconic figure we remember and changed the course of history, but through those turbulent and dangerous weeks he was plagued by doubt, and even explored a peace treaty with Nazi Germany. It's a scarier, and more human story, than has ever been told.