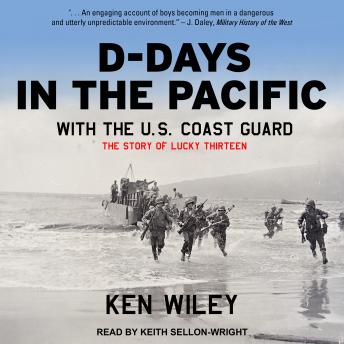 D-Days in the Pacific With the U.S. Coast Guard: The Story of Lucky Thirteen

Download or Stream instantly more than 55,000 audiobooks.
Listen to "D-Days in the Pacific With the U.S. Coast Guard: The Story of Lucky Thirteen" on your iOS and Android device.

Winner of the 2008 Foundation for Coast Guard History Book Award

The images of soldiers and marines coming ashore on hostile shores are embedded in our collective memory of World War II. But what of the sailors who manned the landing craft, going back and forth under fire with nowhere to take cover, their craft the special targets of enemy gunners?

In this book, Ken Wiley, a Coast Guardsman on an Attack Transport in the Pacific, relates the intricate, often nerve wracking story of how the United States projected its power across 6,000 miles in the teeth of fanatical Japanese resistance. Each invasion was a swirl of moving parts, from frogmen to fire support, transport mother ships to Attack Transports, the smaller Higgins boats (LCVPs), and during the last terrifying stage the courageous men who would storm the beaches.

The author participated in the campaigns for the Marshall Islands, the Marianas, the Philippines and Okinawa, and with a precise eye for detail relates numerous aspects of landing craft operations, such as ferrying wounded, that are often discounted. He conveys the terror and horrors of war, as well as, on occasion, the thrill, while not neglecting the humor and cameraderie of wartime life.

An exciting book, full of harrowing combat action, D-Days in the Pacific also provides a valuable service in expanding our knowledge of exactly how World War II's massive amphibious operations were undertaken.