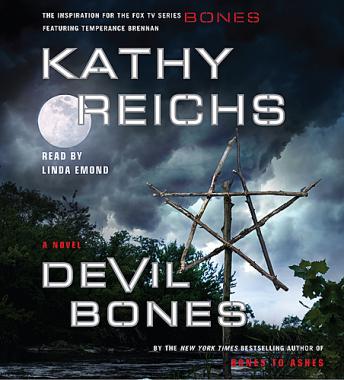 Download or Stream instantly more than 55,000 audiobooks.
Listen to "Devil Bones: A Novel" on your iOS and Android device.

In a house under renovation, a plumber uncovers a cellar no one knew about and makes a grisly discovery: a decapitated chicken, animal bones, and cauldrons containing beads, feathers, and other relics of religious ceremonies. In the center of the shrine rests the skull of a teenage girl. Meanwhile, on a nearby lakeshore, the headless body of a teenage boy is found by a man walking his dog.

Forensic anthropologist Temperance Brennan is called in to investigate, and a complex and gripping tale unfolds. Nothing is clear—neither when the deaths occurred, nor where. Was the skull brought to the cellar or was the girl murdered there? Why is the boy's body remarkably well preserved? Led by a preacher turned politician, citizen vigilantes blame devil worshippers and Wiccans, and Temperance will need all of her expertise to get to the real culprit first.