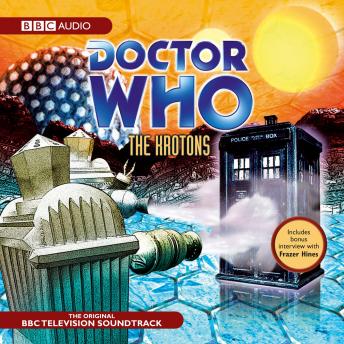 Doctor Who: The Krotons (TV Soundtrack)

Download or Stream instantly more than 55,000 audiobooks.
Listen to "Doctor Who: The Krotons (TV Soundtrack)" on your iOS and Android device.

'The Krotons have always been our friends, our benefactors!' The TARDIS arrives on a planet which is home to the humanoid Gonds. Ruling over these people are the Krotons, crystalline beings who crash-landed there centuries before. Currently in suspended animation, the Krotons can only be reconstituted by an influx of mental energy. Twice a year, the most capable Gond students are taken into the Krotons' spaceship, the Dynatrope. Apparently, they have been chosen to live alongside their masters - but, in fact, they are drained of all mental energy and then killed. When the Doctor, Jamie and Zoe befriend the Gonds, they find a community divided by their servitude to the Krotons. Then the Doctor and Zoe take the Krotons' mental ability test - and unwittingly help revive the crystalline monsters... Patrick Troughton, Frazer Hines and Wendy Padbury star in this classic BBC TV story from 1969. In a special bonus interview Frazer Hines also recalls the making of The Krotons, and his long association with Doctor Who in general.