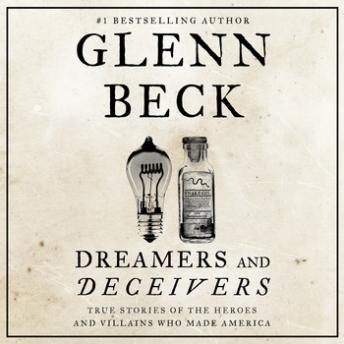 Dreamers and Deceivers: True and Untold Stories of the Heroes and Villains Who Made America

Download or Stream instantly more than 55,000 audiobooks.
Listen to "Dreamers and Deceivers: True and Untold Stories of the Heroes and Villains Who Made America" on your iOS and Android device.

Everyone has heard of a “Ponzi scheme,” but do you know what Charles Ponzi actually did to make his name synonymous with fraud? You’ve probably been to a Disney theme park, but did you know that the park Walt believed would change the world was actually EPCOT? He died before his vision for it could ever be realized. History is about so much more than dates and dead guys; it’s the greatest story ever told. Now, in Dreamers and Deceivers, Glenn Beck brings ten more true and untold stories to life.

The people who made America were not always what they seemed. There were entrepreneurs and visionaries whose selflessness propelled us forward, but there were also charlatans and fraudsters whose selfishness nearly derailed us. Dreamers and Deceivers brings both of these groups to life with stories written to put you right in the middle of the action.

From the spy Alger Hiss, to the visionary Steve Jobs, to the code-breaker Alan Turing—once you know the full stories behind the half-truths you’ve been force fed…once you begin to see these amazing people from our past as people rather than just names—your perspective on today’s important issues may forever change.