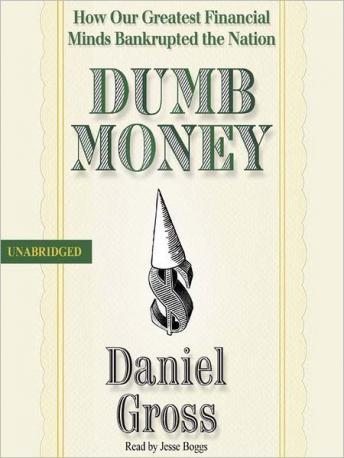 Dumb Money: How Our Greatest Financial Minds Bankrupted the Nation

Download or Stream instantly more than 55,000 audiobooks.
Listen to "Dumb Money: How Our Greatest Financial Minds Bankrupted the Nation" on your iOS and Android device.

The financial crisis that has gripped this country since last September has had so many twists and turns, it would make for a great drama -- if it all were not so real and damaging. Companies are shutting down and laying off workers, 401ks are melting away, and the government is spending $700 billion dollars to bail out banks and financial institutions -- and that's only the beginning. The financial services industry, and the many industries that depend on it -- from housing to cars -- is in intensive care.

So what happened? How did we get to this point of financial disaster? Is the economy just a huge, Madoff-esque Ponzi scheme? It is a complicated and confusing story -- but Daniel Gross of Newsweek has a special gift for making complicated matters easy to understand and even entertaining. In Dumb Money, he offers a guide to the debacle and to what the future may hold. This is not so much a book about who did what, though that's part of the story. Rather, it pieces together the building blocks of the debt-fueled economy, and distills the theory and personalities behind our late, lamented easy money culture. Dumb Money is a book that finally lays it all out in an engaging way, and might just help people invest their money smartly until the gloom passes.