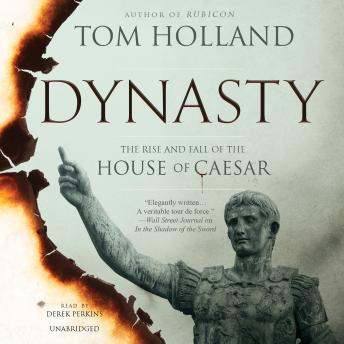 Dynasty: The Rise and Fall of the House of Caesar

Download or Stream instantly more than 55,000 audiobooks.
Listen to "Dynasty: The Rise and Fall of the House of Caesar" on your iOS and Android device.

Author and historian Tom Holland returns to his roots in Roman history and the audience he cultivated with Rubicon—his masterful, witty, brilliantly researched popular history of the fall of the Roman republic—with Dynasty, a luridly fascinating history of the reign of the first five Roman emperors.

Dynasty continues Rubicon’s story, opening where that book ended: with the murder of Julius Caesar. This is the period of the first and perhaps greatest Roman emperors. It’s a colorful story of rule and ruination, from the rise of Augustus to the death of Nero. Holland’s expansive history also has distinct shades of I, Claudius, with five wonderfully vivid (and in three cases, thoroughly depraved) emperors—Augustus, Tiberius, Caligula, Claudius, and Nero—featured, along with numerous fascinating secondary characters. Intrigue, murder, naked ambition and treachery, greed, gluttony, lust, incest, pageantry, decadence—the tale of these five Caesars continues to cast a mesmerizing spell across the millennia.

“A vivid account of five Roman emperors, emphasizing their vices and vicious behavior with less attention to the vast empire, which continued to prosper despite them.”—Kirkus Reviews